Believe It Or Not!
by Joe Reynolds 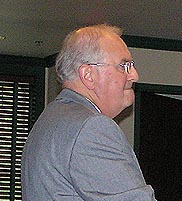 Dennis Escher (left), the County's so-called Sewer Czar, made a presentation to the Worcester County Commissioners at their August 3, 2004 meeting. As a part of his overall written and oral update of where the County should be going relative to regional sewage service, Escher provided the first fairly clear-cut indication of where things are heading in terms of how the County may utilize the Ocean Pines sewage treatment plant.

For many people in Ocean Pines the scenario reads more like a page out of Ripley's Believe It Or Not, or maybe a scene from a Jack the Ripper movie. Escher envisions the Ocean Pines "sewershed" as taking in everything on either side of Route 589 from the northside of Delmarva Downs to about 1.5 miles northwest of Beauchamp Road at one point. To the west of Route 589 the service area would extend about 1.5 miles west along Route 90.

It also appears Escher wants to include a 6-mile by two-mile swath of commercial and residential properties along Route 113 from just north of Berlin to north of Bishopville Road in the Ocean Pines "sewershed."

Escher's interim report won't be done until January of 2005, with the Route 113 corridor addition to Ocean Pines completed by April 2005. The County Commissioners aren't even waiting for Escher's report, however; they have already instructed Public Works staff to move forward with the goal of expanding the service area to include new subdivisions.

Other Escher suggestions include taking River Run into the Ocean Pines service area, as well as identifying alternate wastewater sites with spray irrigation for effluent disposal.

If expensive spray irrigation is implemented as a part of an expanded Ocean Pines "sewershed" it could mean dramatically increased rates for current Ocean Pines ratepayers as all users in a service area typically foot the bill.

The pro-growth, exploit-OceanPines crowd are flexing their political muscle and we will have a barrage of news media propaganda from the usual sources as to how this will all be a great benefit to the people of Ocean Pines. You can make book on it. Tom Cetola, elected in large measure by the people of Ocean Pines, has been a strong supporter of regionalizing the Ocean Pines sewage treatment plant. The other strong supporter on the County Commission is Bud Church. The Ocean Pines Water and Wastewater Advisory Committee, chaired by Dart Way, also supports adding outside subdivisions into the Ocean Pines plant.

One can only look on with amazement as the politicians try to "help" the people of Ocean Pines by selling developers a stake in the Ocean Pines sewage treatment plant at cost rather than fair market value.

OceanPinesForum.com will have more on this issue as the details unfold.