Were OPA Ballot Irregularities Exaggerated?
by Joe Reynolds The bold-type headline of an article by John Bozman in the Early-August 2004 edition of the Ocean Pines Progress reads, "Ballot irregularities surface in OPA board election." Bozman, a long-time reporter for the Gannett-owned Ocean Pines Independent, appeared for the first time on the masthead of the Progress as a Contributing Writer in this issue.

In his lead paragraph, Bozman wrote, "The results of the 2004 Ocean Pines Board of Directors election … could be tainted by flawed ballot packages mailed to property owners." The statement is not attributed to anyone. 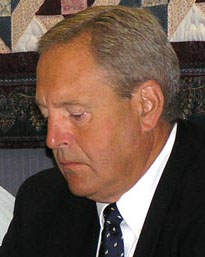 Bozman extensively quotes current OPA Board President and re-election candidate Dan Stachurski (right). Considering the prominence given his quotes, the article could easily leave readers with the impression serious problems in the ballot mailings, prepared and sent to lot owners this year by the Ocean Pines Election Committee, will somehow skew the election results.

For example, Ocean Pines resident Phyllis Truitt said, "All the parts were included in my envelope, but I read today in one of the 'freebie' papers that there was a big problem with the ballots that went out."

Apparently the "ballot irregularities" consisted of some packages with missing items, or more than one ballot per package.

Asked by me about the irregularities, Ida Laynor, chairwoman of the Election Committee said, "You'll have to ask the Board about that. I have no comment."

Committee member Teddi Stanchie, in a message posted to this forum, made no mention of significant irregularities. Stanchie said, "I am on the Election Committee and I have not seen or heard of anything this year to be alarmed about."

Although it seemingly appears Stachurski, an astute politician supported for re-election by OceanPinesForum.com, made a major issue of the ballot irregularities, he said that wasn't the case at all. During a brief face-to-face interview with me, Stachurski indicated Bozman chose to make a big issue of ballot irregularities in his Progress article.

Stachurski said Bozman interviewed him about the overall election process. Stachurski said he mentioned a few phone calls he had received from lot owners about ballot mailing irregularities. According to Bozman, Stachurski said the ballot problems may invalidate an unknown number of votes cast. He is quoted as having said, "In other words, the Election Committee made mistakes in putting together the packages."

Despite the above, Stachurski told me irregularities in the ballot mailings are not unusual because they happen every year. "For me it was not a big issue," he said. "I wasn't trying to make a big issue out of it."

Stachurski said one of his goals if he is re-elected to the OPA Board would be looking at an outside source for the printing, packaging, and mailing of the ballots. Then he would like to have another source, probably the OPA's CPA firm, receive the ballots and do the official counting. All would still be under the general overview of the Elections Committee. This would "keep the election process at arms-length," according to Stachurski.

Stachurski's idea is worthy of very serious consideration by the board and the Ocean Pines community.

Hopefully the news story will not change the Ocean Pines community's appreciation of the hard work and dedication of the Election Committee and its volunteers.