On May 27, 2019, the Worcester County Veterans Memorial at Ocean Pines held its 15th Memorial Day ceremony. A large crowd heard what was one of the most inspirational speeches in the history of the Memorial. The keynote address was delivered by Reggie Mason, a native son of Worcester County -- the son of the late Harold and Margaret Mason of Pocomoke City. Reggie graduated from Pocomoke High School in 1965 and that same year joined the United States Marine Corps. Mason was honorably discharged in 1969 and soon began a career in law enforcement spanning 46 years, including election as Worcester County Sherriff.

Speeches and words on paper are two very different things. Mason's keynote address as delivered was spell-binding. Below are Reggie Mason's words from his notes, photographed and transcribed in the hopes the words in writing are as inspirational as those delivered live on May 27, 2019. 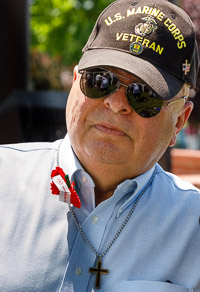 Thank you for having me here today, it is such an honor. Memorial Day is a special day to honor heroes, those from all branches of service who gave their lives to protect this great country and the world. The Navy, Air Force, Coast Guard, the National Guard, the Army, and the Marines.

We must never forget - some were brought home to be buried at Arlington, Virginia; some in their home states; and some here in Worcester County. Never forget those buried at sea and countries around the world. The duties placed on these men and women, they gave it all. Many of us veterans have often thought -- why them and not me. Only God can answer this.

Many of us went into service right out of high school. We were so young when we left home, and came back so much older. The things we saw and did in war will always remain with us.

Welcome to Parris Island, South Carolina. Marine Corp Bootcamp, November 11, 1965. Meeting my Drill Instructors for the first time -- S/SGT J. P Henderson, SGT Camuso, SGT Whitney -- Second Battalion PTL 2022 --never caught their first names. Not a very friendly group like us Eastern Shore folks. They never shook my hand to welcome me, never slapped me on the back for doing a good job, or ask me how my Mom and Dad were doing back home.

Private Mason did get a beating one time, the reason a miss communication. I woke the DI up one hour late. The Recruit I replaced on fire watch gave me the wrong time to wake him. Everyone on Fire Watch got a beating that morning. I thank those three DI’s; they had very little time to train us. This training and discipline played a major part in my four years.

I sure missed my Mom’s cooking. The food at Parris Island was not bad; however, you had very little time to eat. At Infantry training at Camp Gieger, North Carolina, the food was terrible. I lived off peanut butter and jelly sandwiches. I wish you could take Mom with you in service.

After graduation at Parris Island, I would start my long journey -- 29 Palms Marine Base, California, then arriving at Camp Pendleton, California for training for Vietnam.

I arrived in Vietnam in July 1966. I would spend time at Da Nang and then on the Phu Bai and Hue city. I was assigned as Driver/Bodyguard and other duties given to the G-3 Section, 3rd Marine Division. Four of us Marines had this duty, assigned to Colonel Hammerbeck and LT. Colonel Alexander. Soon I would receive secret, Top Secret, NATO, Crypto, and Centro, the highest military clearance. I would drive out to the Outpost delivering messages from Com Center. Then, at night, setting up Claymore mines and manning an M-60 machine gun, around the base.

In 1967, my second tour of Vietnam, arriving at Dong Ha, I finally got the assignment I wanted -- to be a “grunt”. I was assigned to the First Battalion Ninth Marines, 3rd Marine Division, known as “The Walking Dead.” 1/9 at the time had the highest casualty rate in the Vietnam War. I was assigned to H&S Field Casualty Unit. Our job was to protect our medics and assist them. I think I carried more bandages on me than ammo.

In October 0f 1967, we were at a place called Con Thien at the DMZ. It was bad; a lot of casualties. Later we moved to Camp Evans, near Hue city. I would go out on a two-man listening post before dark and return at daylight. Now I was getting a taste of what our Grunts had to go through. On January 21, 1968, Khe Sanh Combat Base came under a heavy attack. The Twenty Six Marine Regiment, the Base, 1/26- 2/26 – and 3/26 on the hills around the Base and the Army Special Forces Camp at the village of Lang Vei were surrounded by more than twenty thousand NVA. On January 22, our battalion, 1/9, was loaded on choppers and arrived at the airstrip at Khe Sanh Combat Base. We moved to the rock quarry and Hill 64, southwest of the base. This was the worst battle for me, and many times I thought our six thousand would never make it out.

So many wounded and those dying. When we arrived, it was one thousand in my battalion and soon under 700 hundred. For us six thousand, we were pounded day and night by mortars, rockets, and artillery. At night the NVA in the thousand’s would attack our hills and the Twenty-Six Marines, the Combat Base. For the first time in the war, they used eleven Russian tanks to over-run the Army Special Forces camp only miles from us.

We sat there listening to our radios, and asking if we could go to them. They kept yelling for help; we were told no -- possible ambush. One day later on February 8, a day I will never forget, our Hill 64, just a few hundred yards away was almost over-run. Twenty-eight Marines in Alpha 1/9 Company died and twenty-nine wounded, out of sixty-four. More than 150 dead NVA laid around the hill. Of the last of two marine bodies recovered in a bunker, one was my good friend CPL Bill Handley of our field casualty unit.

The NVA would not give us a break. On 29 February a Marine CH-46 was shot down flying into Khe Sanh; all twenty-three onboard died. On 6 March an Air Force C-123 was shot down at Khe Sanh; all forty-nine on board died. Every day I spent at Khe Sanh I would walk and run over a mile to Khe Sanh Combat Base to pick up com messages to bring back to Lt. Col. Mitchell. Knowing my high military clearance, no officers were going, that was just another assignment given to me.

I came from a church-going family; in Vietnam, I became so much closer to God. I prayed a lot -- more at Khe Sanh. I saw grown men cry, including myself. Many of us Veterans have heard the wounded and dying crying for their mother’s or a wife.

I spent 68 days at Khe Sanh. Nine days after I left, the siege at Khe Sanh ended. They say over one thousand of the six thousand died; wounded, I have no idea… many, many. I have no doubt, if not for the jet air strikes (24,000), 2,700 B-52 missions and our artillery fire, my good friend here in Ocean Pines, Ray Updike with the Twenty-Six Marines, and Reggie Mason First BN Ninth Marines, and many, many more would not be here today.

I often think about how many died during the TET Offensive when every base in Vietnam was attacked on January 31, 1968. A special thanks to our helicopters, the medics, doctors, and nurses -- they saved so many lives.

Once arriving home in Pocomoke, I received a letter from my S/Sgt Pare, telling me the day I left Khe Sanh my good friend Cpl Luzon Beasley, Lt. Col. Mitchell'ss driver/bodyguard, died trying to save a Marine; and then Capt. Schafer, Delta Company, went out to them and died during incoming fire. More bad news -- my fighting hole was hit; my replacement died and my friend CPL John Fletcher of our casualty unit was wounded and flown out. I would spend my remaining 1-1/2 years as a sergeant at “A” company Henderson Hall Arlington, Virginia.

We veterans must tell our stories so that our kids and grandchildren understand what freedom is about and those who gave their lives for it. We must continue to make sure our government takes care of our veterans, that they receive the very best treatment at our VA hospitals and that the search for POW’s, MIA’s continues. Do not forget our homeless Veterans. Support our men and women who are currently serving; they need us to be there for them.

When I went to Vietnam I was single. How much letters from friends, relatives, and those specials letters from my mother meant to me. Mail call was something we Veterans always looked forward to; no mail was not on time, especially at Khe Sanh, and Mom wrote to me every day. My mother passed away twenty-one years ago on Memorial Day.

Going through Mom's papers and looking in her bible, we found notes she would write to God, She had the dates and times, after midnight, sometimes 3:00 am, after Dad had gone to bed. She would ask God to look after her baby boy and bring me safely home. I loved my Mom so much, she sure missed a lot of sleep worrying about me those twenty months, I guess it’s a Mother thing. I found a poem in her Bible, one I sent her from Khe Sanh, and I have no idea where I got it. This is to you Mom, our Gold Star Mothers, all Mothers/Wives that have a loved one that has served or currently serving. 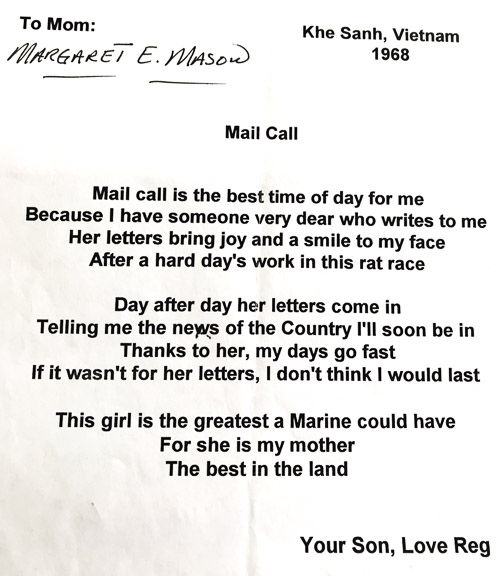 A special thank you to wife Debra, son Reg Jr., his wife Christy, grandson Carey and granddaughter Margaret, family members and friends for their support. Sure it was tough on me, but there were others who had it much tougher. Help our Veterans by giving to our American legions, VFW’s; right here at the Worcester County Veterans Memorial at Ocean Pines buy a brick for a loved one that has served.