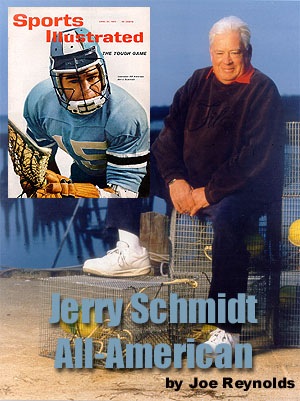 Jerry Schmidt came to Ocean Pines after a decades-long career at the pinnacles of the lacrosse world. Today he is counted among the icons of the sport.

Schmidt soared into the upper echelons of lacrosse superstars during his playing days at Johns Hopkins University when, as a senior in 1962, he was selected for the second time as First Team Lacrosse All-American and a photograph of Jerry appeared on the April 23, 1962 issue of Sports Illustrated magazine. He remains the only lacrosse player to ever appear on the cover of Sports Illustrated.

Schmidt went on to coach at the Naval Academy, Princeton, Cornell, and Hobart. His greatest coaching successes were at Hobart where over an 11-year period he led his team to three championships in 1972, 1976 and 1977. Schmidt was named Coach of the Year in 1977.

Perhaps the best judges of a coach are his players, and Jerry Schmidt was a winner here as well. Dave Creighton, Hobart All-America goalie in the early seventies had been coached by Jerry at Calvert Hall High School in Baltimore and then went to Hobart after Schmidt became head lacrosse coach at the Geneva, New York college. Creighton said, "The reason I went to Hobart was because he was there. I always admired him because he was always supportive of everyone he worked with."

Francis Smythe, Princeton co-captain in 1982 said, "Coach Schmidt always wanted to play the best teams. He said the only way to measure yourself was against the best. He made being out there fun and enjoyable." Perhaps that last statement is the greatest accolade a coach could receive.

Officially, the sport has been kind to Jerry Schmidt as well. To note just a few major recognitions:

Despite all the awards and national recognition both as a player and a coach, Schmidt said, "Nothing gives me more pleasure than the accomplishments of my players after they graduate. I try to keep in touch with as many of them as possible. I feel like every one of them is a part of my family."

Soft words for a man described during his playing days as an attackman who made "road kill" of the opposition.

(Jerry Schmidt passed away on June 3, 2004 about 3 weeks after this article was published.)