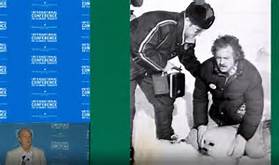 Description: In 1978 Dr Patrick Moore of Greenpeace attempted to protect a baby white seal off the Coast of Canada from the hunter’s club. He was arrested and hauled off to jail, the seal was clubbed and skinned, but a photo of Moore being arrested while sitting by the baby seal appeared in more than 3000 newspapers around the world the next morning. This won the hearts and minds of millions of people, advancing the Greenpeace environmentalist agenda.